You know, I have always liked #CelineDion & thought her vocal rage is quite unreal but after seeing her concert in #LasVegas this week… I have a whole new appreciation for her. She was lovely & engaging from the moment she stepped out on the stage but once she started to sing… that was it… we were enraptured! You realize with every song she sings, that her #talent is ridiculous, she makes it look absolutely effortless, but also that each song must be hard for her to get through now that the love of her life (& her manager throughout her career) is now gone… Celine’s husband Renee passed away in 2016, which she does make mention of, but you feel it in her emotional performance anyway.

One thing I did not realize, is that Celine is quite funny! She made a lot of jokes while speaking to us, the audience & when chatting with her band & back up singers. She came out once wearing the #LasVegasKnights hockey team jersey! Despite her & I both being #Canadian girls, we obviously still have a healthy respect for the brand new team that has risen to the top of the NHL to be in the Stanley Cup Finals.

One thing we loved was that she happily allowed photos (no flash). She sang some of her original songs, even a little piano bar number… and who knew Celine could scat?! But scat she did & it was fantastic. She sang a duet with her back up singer of ‘Beauty & the Beast’ – excellent pairing of voices there! She was gracious to her band & they were spotlighted as well with some instrumentals. I did get emotional for her when it came to ‘All By Myself’ because again, you could only imagine the heartache she & her children feel since Renee has been gone. I think most of us are suckers for a true love story, non?

Of course, the highlight of it all was the encore… nothing other than spectacular… the #Titanic theme – My Heart Will Go On… not a dry eye in the place! Celine was featured inside of an actual cascading, spinning waterfall right onstage! She was amazing, a true show woman & I would absolutely go to see her again. Despite having has some recent health issues… her performance… flawless. 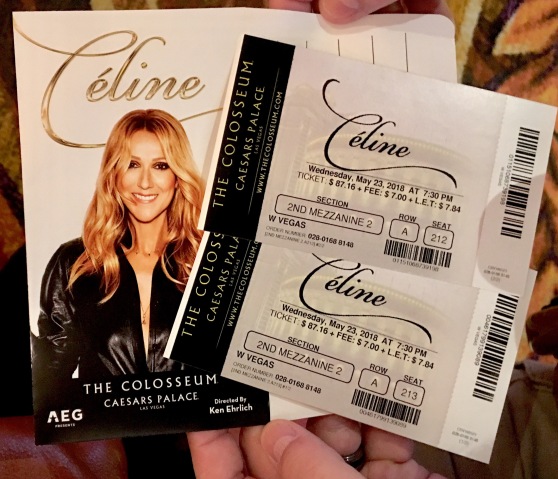