Wow. I mean just W.O.W… so we had been in San Diego & Los Angeles for about 6 days & were heading home. We were to leave from LAX. A pretty big, busy place, right? First of all, the bus driver nearly drove past our terminal. She caught herself just in time & off we leapt with our luggage. We got inside departures, the check in went well & the polite staff member said to us “Just head back to your left to Gate G. Have a safe flight” He even pointed in that direction. We about face-d, walked back toward where he gestured to & came upon… a wall. We looked around. Nowhere to go but outdoors. Literally everything else was blocked off. I discovered a small sign that kinnnnnnnd of points in the direction of where we had just been dropped off… do we actually go outside? Sure enough, as we ventured out, we saw a sidewalk & more construction barricades so we cautiously walked that way… behind us were other travellers doing the same thing. There really was only two choices: we go back to where we checked in and say “Ummm where do we go again?” or we continue on. We continued on. Sure enough, a ways down the sidewalk, we spotted some more somewhat useful signage that pointed to the gates.

That’s when we could not believe our eyes. Now, don’t get us wrong, we understand that as more people travel & airports etc are being used way more often by tons more people – improvements must be made, renovations have to be done & there will be a little confusion. We’ve been in airports during renos before. (London, Heathrow… the long, painful night of the ongoing clanging security alarms & jack hammers…) There really is no good time to do construction in such a busy place. The thing is: signage would clear up the majority of issues. As would strategically placed staff. We found ourselves being herded like confused cattle into what can only be described as a holding pen. There were about 80 chairs & eleventy-billion people. Ok so not quite that many, but you get the point. We decided to eat something, since we had arrived three hours ahead of our flight (as you’re supposed to do) & you’re never sure if there’s food served on board or not. We hauled ourselves into the Starbucks lineup. That was about 45 minutes. Now they were hustling & getting orders in but with only two machines – you can only make what you can make… Having ranted about that I will also say that I was thrilled to see more healthy food options & also some for dairy free, gluten free, vegan diners. There was a Shake Shack nearby as well, but not as healthy and just as packed full. We managed to score two seats as someone left to line up to board their flight. I needed to wash my hands & go to the loo so spent an hour in that lineup too. We thought we’d wander about & see some shops. There were kiosks. With bug spray, ear plugs, Tylenol & water. That’s. It. No windows or stores to peruse. Not even one. I swear I saw a fist fight brewing over an outlet with a USB port since quite a few that were in the seats weren’t working.

It would have been good to have some signs or staff to let you know, once you’re through security – There. Is. NOTHING. Nothing to see. Nothing to do. Nowhere to sit. Travellers can then make the choice to spend maybe just one more hour wandering & looking around prior to checking in. Upon reflection, there seemed to be a shortage of staff in general… garbage containers were overflowing everywhere, there was no one to ask for directions or advice. There was one very determined woman who worked in the loo, making sure everything was clean & kept in order, so kudos to her.

We’ve learned that you have to expect just about anything when travelling. You have to roll with it. (Speaking of roll with it: For the love of God, get a good suitcase with decent spinner wheels… just spend the money, get the warranty & for a few years – travel much easier.) Always, always have something to read with you. Also, enjoying who you are travelling with is a major plus 😉 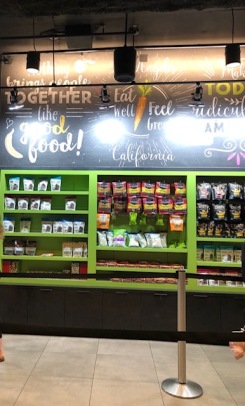 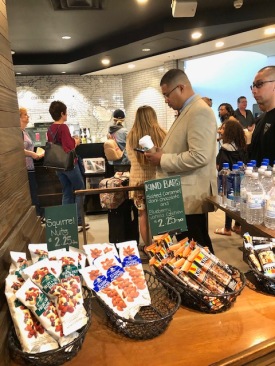 We only arrived at @Maya.losangeles #hotel about 2 pm or so & we’ve been treated so well already!  Our #room is spacious, clean & bright with an amazing #view of the #harbour – we even have a little #patio with chairs & a table. We were taken on a mini #tour by a staff member who happened to see us wandering along, he set us up with #margaritas at the #bar & then we spent a few happy hours at the #pool. There was LIVE #Caribbean – type #music & the perfect weather – #sunshine! We #swam for a bit then #CaughtSomeRays Once the sun started to go down we went back to our room to change for #dinner & heard a #KnockAtTheDoor … it was #champagne #compliments of the #hotel for our #anniversary! What a way to #TreatGuests – #5StarTreatment Now we can’t wait to see #WhatsForDinner in the #WaterfrontRestaurant