We arrived late morning, our room wasn’t ready so we left our bags with the hotel & went to have breakfast at 3Sixty Cafe & Market. Our waiter was John, a lovely man who asked about us & our trip. When he found out that our room wasn’t ready, he tore up our receipt for breakfast & wished us a good stay. There is a breakfast buffet with quite an array of hot & cold foods but unfortunately it doesn’t change much daily. You could have an omelette or eggs done another way other than scrambled if you asked. There was only an a la carte menu some days, we never really did figure out which days those were. They automatically come to pour you orange juice, coffee or tea but we were a bit disappointed to see when we received our bill that the juice was FIVE DOLLARS A GLASS!! We were able to get into our room later in the afternoon only to discover when I checked the bed linens (yes, I do, EVERY TIME & you should too) that there were black stains on the sheets. My husband went alllllll the way back downstairs… back up! I didn’t mention that there was only one bank of elevators all the way across the hotel from where our room was. So in one spot in the entire hotel there are 6 elevators but not at the other end of the hotel anywhere. We’re fit *snicker* & healthy but guests with any physical issues or small children couldn’t make that long trek. Back to the soiled bed linens, when we spoke with the front desk, the woman was quite short. Suffice it to say, it was NOT good customer service… she informed my husband he would need to speak with the head of housekeeping about it all… not sure why that would be the case – that is not the duty of a guest. Housekeeping never did arrive so we were finally given another room. This room was a good size, linens were clean this time, the view was of the ocean & we could see planes landing at the San Francisco Airport, where it juts out into the ocean. There was plenty of room for clothes storage, a safe, a small fridge & the desk & bed side lamps had both power outlets & USB outlets, as did the alarm clock. They serve Starbucks coffee & Tazo teas in the rooms & in the restaurant, so that was a plus of course. The 3Sixty Cafe & Market was really lovely with it’s soaring ceilings & open, modern floor plan. The food was always good & you could take coffee or tea to go. The market had boxed salads, cheese & fruit plates, baked goods, small bottles of wine, even bottled Cosmopolitans! Our room came with one free breakfast buffet each day, but on the last day we thought we’d enjoy a leisurely breakfast before we left for the airport… that was not going to happen. It was quite busy in the restaurant but there were clearly seats available in the bar & lounge area. We were told it would be a 20 – 25 minute wait despite these seats being open. It seems they would rather turn us away then allow us to sit at the bar tables – interesting, as I had seen others enjoying meals at those tables twice before. VERY annoying. We took yogurt from the market up to our room instead. Another staff issue – we had rented a car for day trips & spoke with the front desk when we took it back so that we wouldn’t be billed for more parking. We noticed on our bill that we were in fact still charged for parking despite not having the car any longer & having let the hotel know that. When we brought it up to the front desk upon checkout the staff member obviously did not listen to us saying we had already reported the car being gone & he said to us “Well how are we to know if you don’t have the car anymore if you don’t tell us??” Condescending much? It got sorted in the end but now we have hard feelings on a few occasions from the staff at The Hyatt. Due to that we wouldn’t stay there again. More & more we are finding it’s incredibly hard to find the same level of service & the attention to detail that we had in Abu Dhabi, UAE. Lastly, the shuttle & driver to & from the airport was very efficient so at least that was good.

This was such an interesting trip on the perfect day. It was sunny, yet incredibly windy and made for a bit of a bouncy, scary ride across on the boat to Alcatraz Island – you could imagine what it must have been like for the inmates. Apparently there is a night tour but I’m afraid this was creepy enough for this girl in the day, thanks… 0_o As you dock, you’re greeted with a large painted sign that states: Warning persons procuring or concealing the escape of prisoners are subject to prosecution & imprisonment. Very ominous even though this prison has been closed since 1963. As you walk towards the cell house there is another old, large warning sign:

United States Penitentiary
Alcatraz Island.
Area: 12 acres.
1.5 miles to transport dock.
Only government boats permitted.
Others must keep off 200 yards.
No one allowed ashore without a pass.

You quickly note the guard towers, the bars on the windows & the desolation here yet when you turn around – the ocean & stunning views of the city of San Francisco… I imagine it must have been torturous for the inmates to see this out their window every day of their incarceration. It was said that certain times when the wind was just right, the inmates could hear the laughter & shouting of boaters, transport boats & seagulls. It is about 1/4 mile nearly straight up to get to the cell house (there is a little transport shuttle that can take those unable to walk between the dock & the prison building). There are outdoor interpretive walks, self guided tours, an orientation video (Alcatraz: Stories from the Rock), exhibits, an audio tour in English, Spanish, Italian, German, Japanese, French, Mandarin & Dutch & even 3 bookstores with memorabilia. We wanted to take in the audio tour but soon learned that there was an actual former inmate in the bookstore signing his autobiography that very day.

William G. Baker #1259, was 23 when he was sent to Alcatraz – he was originally in for car theft but continued to escape 3 other prisons so was sent to The Rock. While ‘inside’ he learned to become one of the world’s *ahem* best counterfeiters. He is one of only three free, surviving former inmates of Alcatraz. The audio tour was extremely well done, it was narrated by four former guards & four former inmates. As you walked along there was even the clanging of cell doors, interactions between the prisoners themselves & points of views from both guards & inmates. Alcatraz had to be shut down in 1963 due to deteriorating buildings, the lack of stage system & high operating costs. Alcatraz was never filled to capacity – the average was about 260 inmates, although the highest was 320. There are four actual cellblocks with D Block being Isolation. Al Capone was here from 1934 – 1938. Robert ‘The Birman’ Stroud arrived in 1942 where he was placed to D Block (Isolation) until in 1959 when he was moved to a medical facility in Missouri. Some of the officers even lived in apartments, houses or in the duplex on the island. The warden lived on the island with his family too. In the 29 years that Alcatraz served as a federal penitentiary, 36 prisoners tried to escape. All but 5 were recaptured or otherwise unaccounted for. Three who were unaccounted for participated in the same breakout, the June 1962 escape (this event was made into a movie called Escape from Alcatraz with Clint Eastwood). Eight inmates were murdered here by other inmates, five committed suicide & fifteen died of natural cause, including disease. This is such an excellent trip & we booked it through Green Dream Tours (greendreamtours.com) along with the Wine Tour to Sonoma. Both guides, Chris of our wine tour & BB of our Hop On Hop Off tour were excellent! 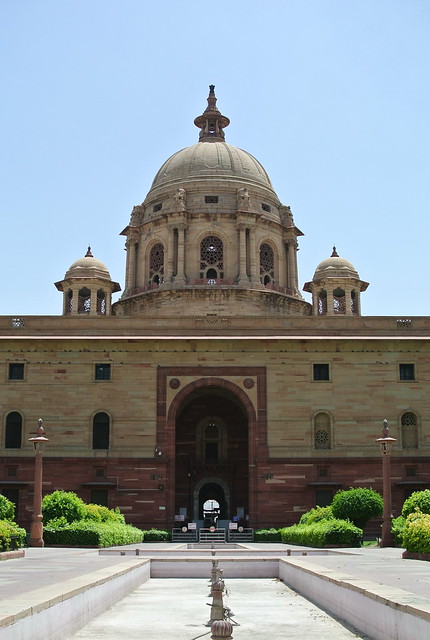 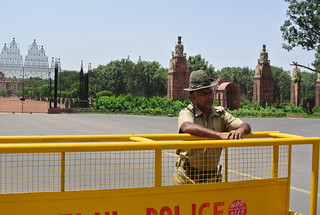 Driving towards the Parliament Buildings in ‘New Delhi’, the sheer size echoed a position of power. In 1911 the foundation of the new city was laid and top architects Lutyen and Baker, set to work on designing what is today’s Parliament hill. This is one of, if not the largest democracy in the world.

Parliament House is one of the most magnificent buildings in New Delhi which has one of the brightest clusters of architectural gems possessed by any country in the world. Visitors to the capital invariably pay a visit to this building as the two Houses of Parliament—the Lok Sabha (House of the People) and the Rajya Sabha (Council of States) are located within its walls. Map and location.

Like Loading...
The scribblings of this travelling housewife & her amazing, oh-so-adventurous husband… you’ll find tips & suggestions of destinations to visit, what to do (or skip!) when you get there, places to eat (or avoid!) & even a few simplifying-your-trip ideas.

I’ve travelled to over 9 countries & 3 of the 7 continents so far… Let’s see — Bangkok to Bath — Athens to Amsterdam to name a few… and I don’t plan on slowing down any time soon!

And I have over 37,564 readers on tripadvisor! If you have any suggestions, comments, or if you’d like to tell me how a post helped you – please don’t hesitate to drop me a line at: myreturnticket@hotmail.com or read my contributions on tripadvisor.ca/members/ChrisFranklin